skip to main | skip to sidebar

"I dream of Africa which is in peace with itself."-Nelson Mandela

Some of you may have heard about the recent upheavals in Guinea Bissau (the small neighboring country next to Senegal).
Here is updated link to the news: http://rushmoredrive.com/LatestNews/Troops_Assassinate_President_of_Guinea-
Bissau.aspx?ArticleId=3468464181480366897

Guinea Bissau is one of four countries that Sean is responsible for in which he travels quite frequently, too.

Our week started out by 6 am call from one of Sean’s colleagues advising him there was bomb detonated in Guinea Bissau killing the Minister of Defense. It made Sean realize maybe his 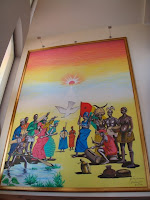 travel plans for the week might be scrapped. Sean was supposed to be leading a VIP delegation with the US Ambassador down to Guinea Bissau to meet with their top government officials this week. Quickly, he got into work, knowing that it would be extremely busy day.

Later on I was discussing the recent news in Guinea Bissau with my cook (I try to practice my limited French), when a news flash came upon the radio. The President of Guinea Bissau had been
executed in the streets in retaliation for Minister of Defense’s death earlier that day. I got through to Sean after about 2 hours and was trying to figure out what his next step would be. The visit from the delegation had been scrapped, and he was urgently needed to go to Guinea Bissau. The airports and the borders were closed for 48 hours, so Sean was able to get out by Thursday evening. He is attending the 2 funerals.

Today, Sean called and said that he felt he was on a movie scene. One reason being that he met with the victims in the past couple of months on his recent visits. Second, maybe because we 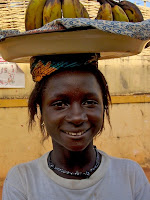 just watched “The Last King of Scotland” within the past month. The Presidential Palace still had blood from the president, in addition to pictures of the machetes that were used on him before the president was executed on the street. Yes, pretty gruesome and right out of Hollywood.
Here are a few pictures of Sean’s recent travel to Guinea Bissau. I especially like the girl with the bananas on her head.
Say an extra prayer for Guinea Bissau, I think they need it.
Posted by Madden Family at 1:26 AM No comments:

Planes, trains and automobiles to Garmisch! 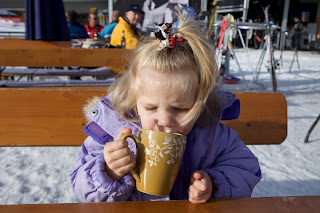 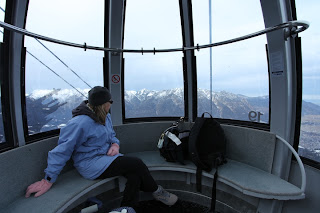 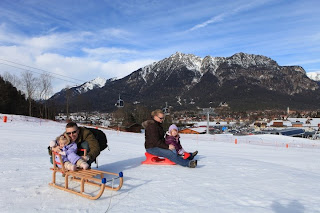 We just got back from a week to Garmisch, Germany.  The trip started out a little rocky, but overall it was really nice to be in Europe.  We had to fly through Madrid and catch a connecting flight to Munich.  Unfortunately, we missed our flight (didn't realize there was a time difference from Dakar) and had to catch another flight 9 hours later.  Thankfully, Madrid has wonderful child center and  a Zara (one of my favorite stores that was in Oman) in the airport!  Once we got to Munich our rental car caught on fire just as we got all of our luggage crammed in and 2 car seats adjusted.  Luckily, we were able to return it for another car without too much hassle.
We stayed at the Edelweiss resort (Armed Forces Resort www.edelweiss.com); it was wonderful child friendly resort.  We have seen commercials for the past 3 years on AFN in Oman for this place so we were ecstatic to finally get there.
There wasn't much snow and it was quite warm for this time of year.  We still managed to go sledding and get to the top of the mountain a few times.  We did not get the opportunity to ski since we had the girls (maybe in a few years-): Abby learned some important advice "never to eat yellow snow"  from her Dad.
The food was wonderful and it was great to drink hot chocolate, good beer, and German wine.
Hopefully, we will be invited next year and we will take more leave afterwards!
Posted by Madden Family at 1:50 PM No comments:


On New Years Day we packed the car (2 kids, 1 nanny and 1 dog). It is pretty tight since our second car has not arrived yet. We travelled 65 km to Reserve de Bandia. It was small park (for Africa) about 3,000 hectares

with giraffes, rhinos, various species of deer, monkeys and crocodiles. When you arrive at the park, you have to hire a guide to go in your car or ride in the park's truck.We rode through the park and managed to see all of the animals. Our guide seemed annoyed at Sean for stopping to take so many pictures. I guess he didn't realize Sean is part Japanese! (:In the park the have small outside restaurant near the watering hole where you get a fantastic view of all the animals coming down for a drink and the crocodile eating his lunch.
The monkeys were terrible, they have become accustomed to getting tidbits of people's lunch. So whenever food was brought out they would hang out in the nearest tree and try to steal some food. One of the monkeys took an immediate disliking to Otter and displayed his fangs!

Meanwhile Otter (being himself) did not care or even acknowledge the monkey. After a few rocks being thrown the monkey decided to steal someone else's lunch.

After the park we headed about 20 km to Saly.
Saly is this beautiful seaside town with gorgeous beaches and fantastic local restaurants. We rented a small villa with a pool about 3 minute walk to the beach. The beach was fantastic. It was clean and pretty deserted. It was a fabulous trip and so close to Dakar.

Three days after our trip I noticed a welt on Otter. I got out the hydrogen peroxide to clean his cut and noticed something moving inside of the welt. They are called mango worms- basically maggots.. Look it up on a google search and you will be totall

y grossed out. Welcome to Africa!
Posted by Madden Family at 8:09 PM No comments:

"One always begins to forgive a place as soon as it’s left behind.” – Charles Dickens

I am fulfilling my New Years Resolution to start a blog about our lives and the daily adventures of living in another continent.  Wow, some of you thinking it is only 13 days into the new year and that I am doing pretty well.  I am bit of a procrastinator, this is my 2008 resolutuion.  I had very busy 2008.  I moved 6,000 miles to the US, gave birth to my second daughter, then moved 3,000 miles to West Africa.
You are probably wondering about the quote.
I thought it was so befitting of where I have lived since I left Boston in 1997.  You complain about every place you live about the small annonyances - weather, shopping, food and people.  Little do you realize that you were having the best time of your life until your gone.
I promised myself I would start writing things down so my girls would have a memory of our life overseas. Also I wanted to give some insight to my family and friends of our life in another country and the small things we do take for granted in the United States. 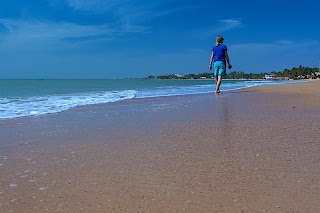 So here it is- I hope you enjoy and please leave some comments!
Posted by Madden Family at 3:01 PM No comments:

Madden Family
Traveling the world.. one continent at a time.